When a family drives up to summer camp at Wolf Ridge, it’s probably the beauty of the Northwoods that they notice first.

Second, it’s the counselor staff in their colorful staff shirts. The third thing they notice is the counselors’ attitudes. A great camp counselor can make a camper feel at home right away and jump-start the friend-making process by including them in a group activity at a level they are comfortable with. As the camp week goes on, a camp counselor will help create a group bond that will continue to stick with the campers at the end of the week when everyone needs to split up and go home.

At Wolf Ridge, the counselors will be with the same group of campers all week long.

This gives them time to create these relationships with their group. They do the work of taking them to meals, to classes, solving conflicts, being an extra set of eyes at the swim beach, making sure medications are handed out appropriately, and supervising them overnight in the dorms. 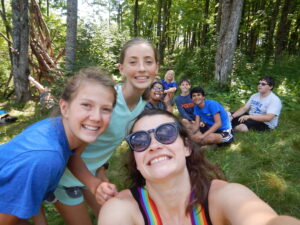 If interested, they may also teach a session of camp based on their interests, such as archery, arts and crafts, or looking for animal signs. The rest of the “work” is really just participating in camp! They will go through the naturalist-led classes with the kids. They will be involved with campfire skits, songs, stories, and games. During the in-between times, they will lead games or maybe during a busy day, the campers will want to sit around and have some quiet time. The best way to supervise is to be an active part of what a camper is doing!

As a child, I had many summer camp experiences, and while the experiences and activities that were set up by the camp staff were what drew me to the camp and what I would tell my parents about, it was the camp counselors and leaders that I interacted with that had the most impact because I wanted to be like them!

I remember one summer when a friend and I had swimming and sailing classes so we became friends with one of the aquatics lifeguards and teachers. His name was Nick, and because of my idolizing of him that summer, when I started my first year of high school Spanish that fall and needed to pick a Spanish name, I went with Nico, the Spanish equivalent of Nick.

Growing up, we follow in others’ footsteps until we are ready to make our own.

Your camp counselor hits that sweet spot of being able to look up to someone older than you, but still young enough that you can see yourself becoming them. That is the true importance of a camp counselor.

David is a Wolf Ridge naturalist and part of the program team. His focus is on the natural and cultural history of the North Shore. Did you know that water is at its densest at 39°F? This allows seasonal turnover of lakes in the fall and spring!